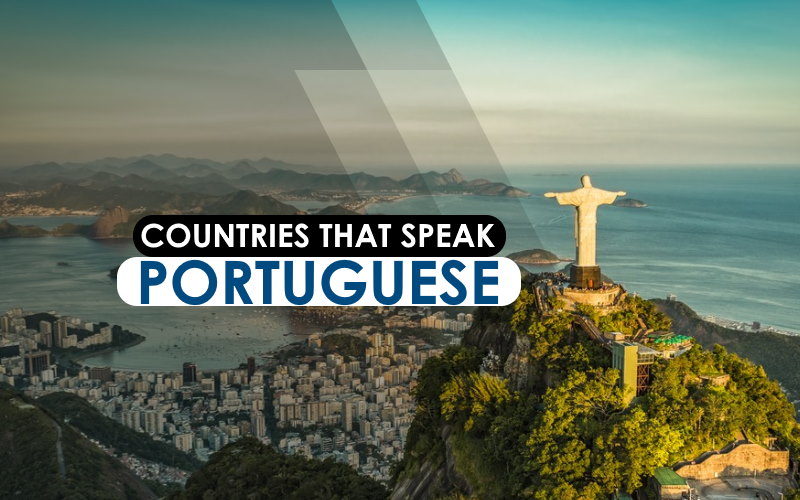 From the list of countries that speak Portuguese, Portugal is home to the speakers of Portuguese, making it one of the world’s top 10 languages. Would you like to know where and how many people speak Portuguese? We’ll begin with a little history before moving on to some facts about the language.

An Overview of Portuguese History

Portugal, the first country in modern history to establish a colonial and commercial empire, as well as the longest-lived worldwide history (1415-1975), has spread Portuguese (Português) throughout the world.

Several other countries speak or study Portuguese as a second language, making it the fifth most spoken language worldwide. There are few languages spoken so widely throughout the world as Portuguese, with over 200 million native speakers.

With its 184 million residents and 51% of the South American population, Brazilian Portuguese is the most commonly spoken language in South America. In addition to the three countries in which Portuguese is an official language, eight other countries are members of the Community of Portuguese Language Countries.

Portuguese is not just one of many official languages in various organizations; it is also the working language of the European Union, Mercosul, and the African Union (along with the other official languages).

Portuguese is one of the spoken languages of Africa which became a popular second language for Africans, Asians, and South Americans. The fastest-growing western language is Portuguese, followed by Spanish.

According to the number of speakers worldwide, Portuguese is the 9th most commonly spoken language. Below are Portuguese speaking countries where Angolans, Brazilians, Portuguese, and Mozambicans speak the language, as well as Equatorial Guinea, Cape Verde,  Guinea-Bissau, East Timor, and Macau.

There are a total of 195 million Portuguese speakers in Brazil, the only country in South America that speaks Portuguese. In comparison to the rest of the world, Portugal has by far the highest number of Portuguese speakers. Portuguese is the language of the first language for 99% of the Brazilian population.

In terms of both population and size, Brazil is the largest country in South America. Almost 94% of the Brazilian population speaks Portuguese, making it the largest Portuguese-speaking country. Brazilian Portuguese is the most spoken language in the country, even though over 200 other languages are spoken.

Brazilians already spoke the language before Brazil declared independence from Portugal in the early 1800s. After being introduced to the country during the 1500s, the language had plenty of time to develop roots in the area.

Throughout the last 500 years, European and Brazilian Portuguese have continued to develop differently, including distinct accents, spellings, vocabulary, and forms.

Why Does Brazil Speak Portuguese?

Brazil was colonized by Portugal, thus Portuguese is the language they speak. However, the history of Portuguese is rather complex. Portugal and Spain were the leading powers in the 15th century.

Spain was advancing along the African coast, while Portugal had discovered America for Spain. Newly discovered lands were divided accordingly, which led to a dispute.

It was long a colony of Portugal and gained its freedom in 1975. The country is located on the coast of southwestern Africa. The Portuguese language was adopted by indigenous groups in the 1400s, though indigenous languages are still spoken widely.

The official language of Angola is Portuguese, but fewer than half its residents speak it, though it is becoming a more commonly used first language for its younger citizens.

Portuguese is (obviously) Portugal’s national language. Long before it was carried across the Atlantic to Brazil, this is where the Portuguese language came from. Portuguese is spoken in every place where it is spoken.

Approximately 10 million people speak Portuguese in Portugal today. On the southwest corner of continental Europe, Portugal is located on the Iberian Peninsula. Thus the language spoken most often here is Portuguese.

Besides English, Mirandese is also an official language in El Salvador, though it is mainly spoken in certain regional areas.

An African map shows that Portugal’s influence is not limited to the countries close to Portugal. Countries that speak Portuguese are dotted around the African coastlines on this map of Portugal and its surrounding countries a clear reference to Portugal’s former colonial position.

The Portuguese language is still spoken in Mozambique, a former Portuguese colony. The native speaker’s number is in the tens of millions, with an even greater minority speaking it. On the coast of the Indian Ocean, Mozambique is located in southeast Africa.

1975 was the year of its independence from Portugal. The official language of Mozambique is Portuguese, however, it is only spoken by ten million people and is more of a second language as Mozambique also has 40 indigenous languages. In Maputo’s capital and other urban areas, Portuguese speakers still predominate.

The number of Portuguese-speaking people in Guinea-Bissau is less than 195,000. In Bissau, most people live in an area called ‘a Praça’ (the Square). West Africa is home to Guinea-Bissau.

From the 1500s onward, Portugal dominated the region, but other European countries sought to control it as well. Slaves were historically brought to what is now Guinea-Bissau from Africa.

The current political and economic conditions in Guinea-Bissau may be worrisome for tourists, as it has experienced political unrest and chaos after independence from Portugal.

There is still a vibrant culture in the country, with cinema, festivals, literature, and music created by locals (mostly for locals) that explores its identity and still exists despite poverty.

Known for its clear water, white-sand beaches, and abundance of animal species, such as monkeys, hippos, and buffaloes, the Arquipélago dos Bijagós is one of Guinea-Bissau’s major attractions.

Only less than 5% of East Timor’s population speaks Portuguese, even though it is an official language. During the Indonesian rule of 24 years that preceded East Timor’s independence (in 2002), a language that was spoken in the former Portuguese colony was suppressed.

Portugal has become somewhat of a hotbed of debate as of late when it comes to speaking Portuguese. A small island near Indonesia is the location of East Timor in Asia. During the 1600s, the Portuguese invaded East Timor to acquire sandalwood.

In 1975, Portugal officially resigned. The languages and cultures of this region are diverse. Portuguese is one of the two official languages, though it is uncommon as a first language. About 63,800 people speak Tetun, the country’s second official language. Also, this area is home to more than 30 indigenous languages!

Equatorial Guinea, located on the west coast of Africa, was colonized by Spain and gained independence in 1968. What makes Equatorial Guinea a Portuguese-speaking country? The Portuguese were there first, simple as that.

Initially spotted by a Portuguese navigator in 1471, the region came under Portuguese influence for about 300 years after Portugal renounced some territories to Spain in 1777.

There is no pure form of Portuguese here. Fa d’Ambu is the most commonly spoken language with Portuguese roots, a Portuguese creole mostly spoken on island communities. There is a large number of second-language speakers in Equatorial Guinea, with Spanish and French being the most common languages.

The nation’s membership in the Community of Portuguese Language Countries supports its claim to be an official language as well, as some sources list Portuguese as well.

Equatorial Guinea speaks Portuguese as well as many other countries in Africa The language was officially adopted by Guinea in 2010. In Portugal and the United States, a Portuguese Creole called Fa d’Ambô is spoken there.

Nearly 50 million people live in Spain. Despite Castilian Spanish being an official language nationwide, several other languages are acknowledged as an official in specific regions. Galician, which is spoken by some 7% of the Portuguese-speaking population, is the most prominent regional language.

Additionally, there are an estimated 165,000 Portuguese speakers in Spain. The immigrants to Spain have also brought many Portuguese creoles with them, such as Fa d’Ambu and Kabuverdianu.

In the countries that speak Portuguese, Cape Verde is the country where the majority population speaks this language. As the official language of Cape Verde, Portuguese is spoken by most of the archipelago’s 500,000 residents.

However, Cape Verdeans are almost exclusively fluent in the Portuguese-based creole known as Kriolu (Cape Verdean Creole). Cap Verde is a chain of islands situated near the west coast of Africa in the Atlantic Ocean.

Cape Verde gained its independence from Portugal in 1975, but the Portuguese language remained there with the early settlers. Ethnologue doesn’t even have a number estimate of Portuguese speakers, even though Portuguese is the official language. A Portuguese creole, Cruioulo (also known as Kabuverdianu), is more often found in native speakers.

The Japanese are home to a substantial number of Brazilians who brought with them Portuguese as their native tongue. Why did this happen? Immigration patterns are at the root of everything.

Japan was the destination of many Japanese immigrants during the 1900s. Some Japanese descendants of Brazilians have, however, immigrated to Japan since the 1980s when Brazil’s economy experienced difficulties.

How Many People Speak Portuguese?

Including the above Portuguese speaking countries, a total of 270 million people speak Portuguese, approximately 233 million are native speakers. Second in popularity among Romance languages, after Spanish, it is the ninth most spoken language in the world.