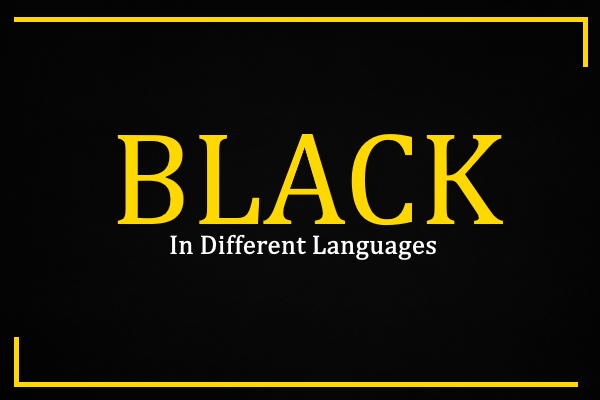 Black in Different Languages: Black is the darkest color due to the absorption of all visible light. It is used to represent darkness. Black is also used as a warning signal. It indeed is the most attractive color infect, the king of all other colors. Black was the first color to use in art. It can be linked with death, mourning, evil magic, and darkness, but it can also symbolise elegance, wealth, restraint, and power.

Black in All Languages

Translation of word Black in almost 100+ different languages of the world.

Black in Other Foreign Languages

What the Color Black Means?

In terms of color, the color black in different languages symbolizes elegance, power, fear, mystery, aggression, strength, authority, formality, death, evil, and rebelliousness. Without black, every other color would lack depth and variation of hue.

It is the color of absence. Black is a color of mystery that tends to suggest the negative or the unknown. The color black signifies strength, authority, power, and seriousness. If a green color dress looks cool, a black suit or dress is elegant, formal, and prestigious.

Black is a powerful color that can evoke strong emotions, but too much black can overwhelm. According to heraldry, black is a symbol of grief. While black can be serious, professional, and conventional, but it can also represent mystery, sexiness, and sophistication.

When it comes to clothing, black visually slims the figure. As with other dark colors, black in interior design makes a room appear smaller. It creates an aura of inconspicuousness, boosts confidence, gives a feeling of potential and possibility, or produces feelings of sadness, emptiness, or gloom in the mind and body.

Dark colors are associate with mourning, death, and sadness in the West. The color black is often associate with teenage rebellion and emotional turmoil. There is positive and negative side to this color. Black characters are typically depicte as the opposite of white characters in movies, books, print media, and television.

Nowadays, the more mysterious the character is, the more likely it is he will wear black. How do we know what black in other languages means? Does it mean the mysterious darkness of the night that hides horrifying nightmares?

Does a black typeface on stark white paper convey meaning because of its sharp edges? How does the dark clothing worn by mourners at a funeral represent the significance of black? It is a color that has profound significance throughout the world.

On a conventional color wheel, black does not appear. In general, it is consider a non-color because it absorbs all other colors of the visible spectrum. When white is mixed with black, gray is created, a paler achromatic color combining both black and white.

In the past, black and white have been use to describe opposites like good and evil, the Dark Ages and the Age of Enlightenment, and night and day. The first black color use in art was charcoal, which was used in prehistoric cave drawings, such as those found at Lascaux in France, and was later achieve by burning bones or grinding manganese oxide powder.

As the color of fertility and the rich black soil of the Nile flooded by the Nile, black had positive associations for ancient Egyptians. A lion’s skin was woven into the clothing of Anubis, god of the underworld, to protect him from evil.

Black was the most important color in ancient Greek culture. Prinius the Elder reports that the famous Greek painters Apelles and Pausanias only used four colors in their works: black, white, red, and yellow.

Among all the banned pigments over the centuries, lead white is probably the most missed by painters. The Ancient Greeks also associated black with the underworld connected to the river Acheron, which separates the living from the dead. Ancient Rome had a social hierarchy that reserved purple for the Emperor.

It was also the color of death and mourning among the Romans. Darkness and evil were often associate with black in the early Middle Ages. Black was not regard as a fashion color with the same prestige as red, the color of royalty. Black in other languages symbolizes humility and penitence for Benedictine monks.

How Black is Defined

The color black has a definite identity, like its opposite. It is a color associate with authority and borders. The color black makes us think of many negative things as well as intriguing things.

The Physical Effects of Black

Due to its ability to absorb all light, black is a low-energy color. A black or dark blue outfit alone can be depressing and dampen the mood. It works well in contrast with white or yellow, however. The black lines on white paper are sharp, definite marks capable of transmitting a lot of information.

What Does Black Symbolize?

The color black in different languages evokes evil, night, darkness, and despair. A color associate with certainty and authority, black is use as an opposition to white as a symbol of the eternal struggle of good against evil, right against wrong, and day against night.

When we think of black, we think of sophistication and seriousness. Little black dresses are one of the most timeless pieces of clothing available, and they are suitable for any formal event. Black is unequivocal, definitive. The design uses it to help create a sense of certainty, and it is not easily misunderstood.

In many cultures, black in different languages is associate with mourning. We perceive bad people as being black-heart when they have black marks on their records. The cover of night is a perfect setting for bad behavior since black conceals rather than illuminates. Too much black in a design can be a distraction.

Despite being the most poisonous spider in North America, black widow females are the only ones that can cause harm. This spider produces the strongest silk of all spiders, and the red hourglass on its abdomen alerts birds and other predators to the spider’s powerful venom.

Ukrainian, Romanian, Bulgarian, Turkish, Georgian, and Russian coasts border the Black Sea. During tidal changes, the waters of the lake are very calm. Despite its former abundance of fish and wildlife, the Black Sea is heavily polluted, and rampant overfishing has contribute to a steep decline in fish populations.

The gravity of black holes, formed by collapsing stars, cannot be escaped, even for light! Scientists believe our Milky Way galaxy contains a supermassive black hole. There are only three species of black bears in North America, and they are the smallest of the three. The US has at least forty states with black bears, and their average life expectancy is ten years.