Bless You in Different Languages 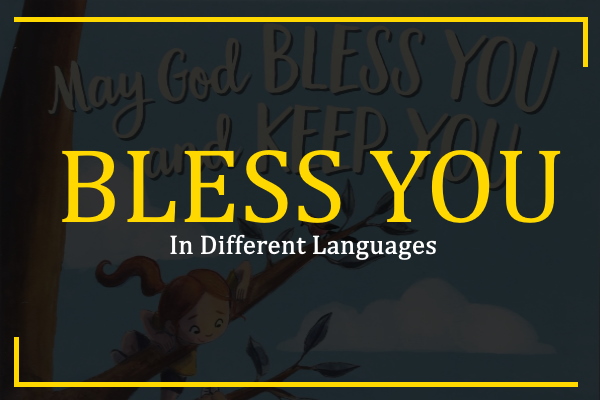 Bless You in Different Languages: The term “God bless you” is popular in English, typically used in various contexts to give a person the blessings. Bless you is something you would say to indicate that if someone is kind to you and you are grateful to them. Bless you is also something you would say to wish someone a farewell. ‘ Bless you! ‘, or often ‘ God bless you! ‘ or ‘ God bless! ‘, is a reaction often used when someone sneezes.

Bless You in All Languages

Translation of word Bless You in almost 100+ different languages of the world.

Bless You in European Languages

Translation of word Bless You in almost 42 European languages.

Bless You in Asian Languages

Translation of word Bless You in almost 36 Asian languages.

Bless You in Middle East Languages

Translation of word Bless You in 4 middle eastern languages.

Bless You in African Languages

Translation of word Bless You in almost 13 African languages.

Bless You in Austronesian Languages

Translation of word Bless You in almost 10 Austronesian languages.

Bless You in Other Foreign Languages

Video Translation of Bless You in 10 Other Languages

More Information about Bless You

There are various accounts of the root of this response. One aspect is known to have arrived from Rome as the bubonic plague raged in Europe.

One of the signs of a disease plague were sneezing and coughing and it was believed that Pope Gregory I (Gregory the Great), proposed saying “God bless you.”, after a man sneezed in order that this prayer might defend him against a certain death.

The word may also have been taken from superstition. Many people believe that the ritual of seeking the grace of God started when the ancient man regarded the soul was in air and was residing in the head of man’s body.

Therefore a sneeze might passively force the spirit out of the body if God doesn’t bless you or protect it.

Some ancient cultures have claimed that sneezing brought evil spirits out of the body leaving others at risk because these forces could enter their bodies now.

The blessing was offered to shield the individual who sneezed the others around him. Bless you is also a response to thank them for any favour they are doing you. Like “let me help you with this”. “Oh@ God bless you my dear”.