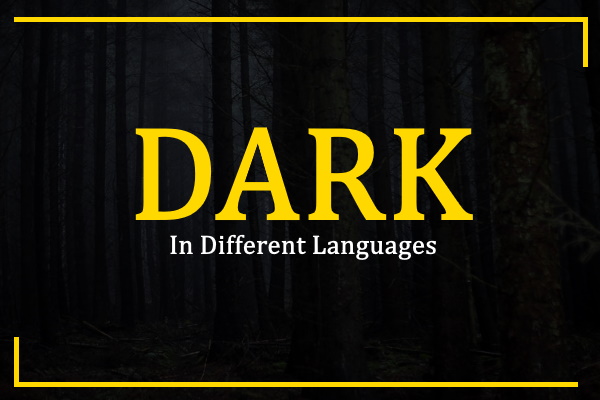 Darkness in Different Languages: Darkness, the opposite of light, is known to be absence of light or visible illumination. In situations of high light or high darkness, human vision is not able to differentiate color. Color vision varies from achromatic to ultimately black when there are insufficient lights. There are restricted light sources in a dark environment, making things difficult to see.

Darkness in All Languages

Translation of word Darkness in almost 100+ different languages of the world.

Darkness in Other Foreign Languages

Darkness is a universal symbol that shows the emotional state or deeper relevance of a person in a subject. It usually means wickedness, grief and sadness, solitude, death, and anxiety.

HOWEVER DARK THE NIGHT, HOWEVER DIM OR HOPES, THE LIGHT ALWAYS FOLLOW THE DARKNESS.

Darkness could also signify ignorance or desperation. If people are in the darkness, it could mean they have no idea what’s really happening.

The power of light could also be emphasized by darkness! In the dark sky, for instance, the stars are brighter.

Black is like emptiness so much. So if you equate this to the reasons why every color is light, but darkness is black, this is because light contains energy and darkness is the absence of every form of energy.

But darkness is nothing, no energy, and it’s black, as black is nothing’s “color.” In order to explain and contrast the light effect, artists use darkness.

In order to produce illumination the pigment colors are mixed to form darkness, because every color absorbs some light frequencies.

Mixing the three primary colors or the three secondary colors, theoretically, absorbs all apparent light and creates black. Darkness is terrifying for some people and it is usually associated with supernatural forces.

Darkness in different languages has many names. Spirits are known to be present in the darkness. Most of the black magic is done during nighttime in darkness.