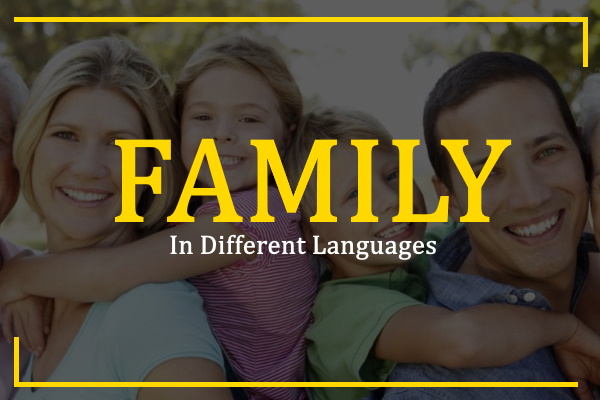 Family in All Languages

Translation of word Family in almost 100+ different languages of the world.

Family in Other Foreign Languages

Video Translation of Family in 10 Other Languages

‘Family’ with a whole lot of meanings, is a single word. People have many ways to describe a family and what it means to them to be part of a family.

Families vary in economic, cultural, social and many other ways, but what all families have in common is that those who call them a family clearly demonstrate that these people are important to the person who calls them his or her family.

An adult father and his descendants are a family. It consists most often of two married adults who usually live in a private and separate house, together with their descendants.

That form of unit is considered to be the oldest in the various types of families, commonly known as the nuclear or independent family.

At times, the family does not only include parents and unmarried children who live in their homes but also children who have married, spouse and offspring, and probably also the elderly. Such system of family is known as extended.

The definition of family differs in ways how we define it. Some think that family is only by blood relations. But sometimes people say that pets can also be a family.

Pets also make you responsible for their needs. Because someone doesn’t live or have a common ancestor in your household, they shouldn’t be considered as family? Even if that person stood by you in every ups and downs of your life.

It is the behaviour and feelings of a person that defines if they are a family or not. Family is a very precious thing which is earned through emotions, love and care.

Robin Roberts said, “The best part of life is when your family becomes friends and when your friends become family,”