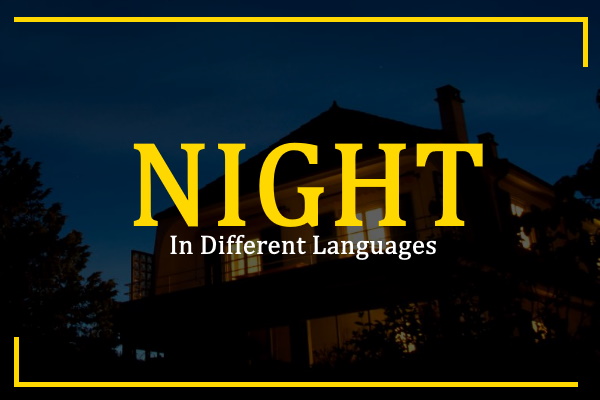 Night in Different Languages: Night or nighttime is the duration from dusk to dawn in the absence of sunlight. Night is spent by people sleeping and resting. Night is time during the hours of darkness. Night usually starts at approximately 9 pm and finishes at approximately 5 am. Stars look so beautiful at night in mountain areas.

Night in All Languages

Translation of word Night in almost 100+ different languages of the world.

Night in Other Foreign Languages

Video Translation of Night in 10 Other Languages

At dawn the night comes to an end. The word can be used in various ways from bedtime to morning. The word ‘ night ‘ is used in common communication as a ‘ Good Night ‘ and sometimes shortened to ‘ Night, ‘ especially if someone sleeps or leaves.

Good night is used as a greeting for someone who is going to sleep. It is also to bid farewell. The beginning and the end of a nighttime differs according to conditions like season and latitude.

Twilight is the time of day, whether after dusk or before dawn, from daytime to night. It is the time when sky appears pinkish.

Due to the psychological connection between night’s all-inclusive obscurity and fear of the unknown and obscurity of the major sensory system (a sense of sight), night is often associated with danger and evil.

The vulnerability and hazard to human physical survival are natural associated with nighttime. Darkness can conceal criminals, animals and other potential hazards. In human imagination and culture, midnight has special significance.

The concept that sorcery and magicians are at night more active also included in the belief in magic. Spiritual sessions are normally held near midnight.

Similarly, the mythical and folk creatures are described as more active at night as vampires and were-wolves. Ghosts are thought to walk almost exclusively at night.

There are stories and legends warning about nighttime dangers in almost all cultures.

There are many ways to say night in different languages. We often use to say goodnight before sleep.

Literature frequently associates night and the absence of light with dark that is previously symbolic to villainy, lack of existence or a lack of knowledge in many cultures.