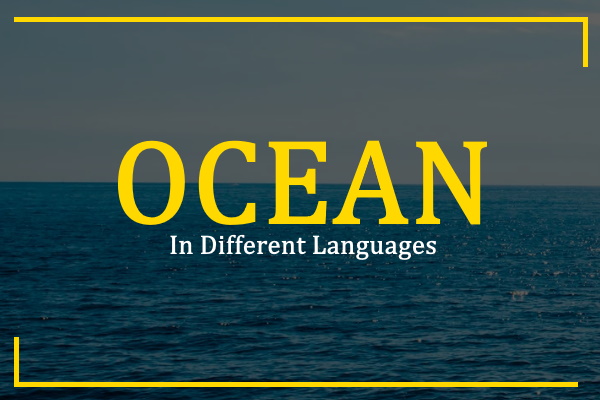 Ocean in Different Languages: Oceans is a large body of saltwater that constitutes 70% of the Earth’s surface. When viewed from the satellite all the area that appears water is oceans. There is One World Ocean, which means that the whole world is connected to one ocean, but it is divided into different parts according to the geographic area. Oceans are the world’s largest habitat and regulates the climate. Another word for ocean is sea.

Ocean in All Languages

Translation of word Ocean in almost 100+ different languages of the world.

Ocean in Other Foreign Languages

Video Translation of Ocean in 10 Other Languages

There are more than five hundred species of sharks found in the ocean, The largest shark size is equal to school bus and the smallest size of shark can be kept at home in fish aquarium as a pet.

There are five oceans divided by geographic area: the Pacific, Atlantic, Indian, Arctic, and Southern. Oceans hold about 1.34 billion cubic kilometres of water that constitutes to 97% of Earth’s water supply.

Ocean wave is produced when the wind blows across the surface of the ocean. In different countries people like to surf on waves when it formed. They like to spend their time on the beach on weekends.

Oceans are a large source of various minerals such as: magnesium, calcium and chlorine. Oceans are the regulators of temperature as they absorb Sun’s heat and transfer it to all parts of the world.

Oceans maintain the ecosystem and stabilizes the economy. Some countries are well known in fish export. Many kinds of fish are being eaten by humans and are known to be a great source of proteins.

Other eatable animals include squids, lobsters and crab. Millions of plants and animals in the world live on the oceans or deep sea.

Starting from the tiny microorganisms to the largest living blue whale all life is dependent on oceans. Most life in oceans is dependent of phytoplankton: a microorganism that floats on water and produces more than half of the total oxygen in world.

Everyday new research is done on oceans and new organism is discovered still it is said that about 80% of the ocean is still undiscovered.

Many ocean species are endangered due to the human activities. Water pollution is a threat to ocean life. Marine pollution includes trash and chemicals collectively.

Ocean in different languages has many names like ozean, oceano, hav and okean but meanings are same.

The chemicals from factories are drained directly into the oceans. These chemical substances are unrefined and a life threat to marine animals.

High concentration of nitrogen and phosphorus in the ocean leads to the growth of algal blooms which is toxic to humans and wildlife.

This draining of chemicals should be banned without any refining. Throwing of plastic bags must be prohibited. Government should take necessary action for the conservation of marine life.