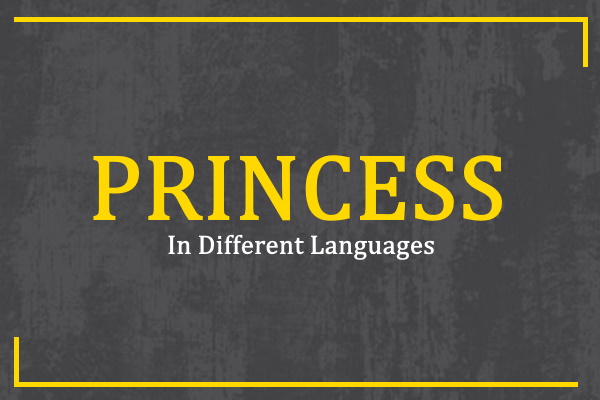 Princess in Different Languages: Princess is a royal title and the prince female equivalent. The term is usually used for a prince’s consort or for a king’s daughter or prince’s daughter. Every boy desires beautiful princess in his life.

Princess in All Languages

Translation of word Princess in almost 100+ different languages of the world.

Princess in Other Foreign Languages

Video Translation of Princess in 10 Other Languages

Word Princess is derived from Latin which means “principal citizen”. For a monarch’s daughter, who in English could simply be called the “Lady,” the title “Princess” was not regularly used.

Old English did not have a female equivalent, except the queen, to “prince”, “earl.” Royal women have simply been mentioned or called “The Lady”.

Marital princesses are recognized as wives of the sons of the Sovereign and male grandsons. These are generally entitled by virtue of marriage to “Royal Highness” and the title is maintained if widowed.

Princess Royal is a major title which a British sovereign usually gives his eldest daughter (but not automatically).

The royal blood Princesses are the rightful daughters and the legitimate granddaughters of the male line of the British Sovereign in current practice.

They are dynasts, which are the future throne heirs. For those individuals, the designation “Her Royal Highness” and the term “Princess of the United Kingdom of Great Britain and Northern Ireland” are a right to life.

The Princess title and Royal Highness was prefixed before another honorary title to the Christian name. Princess is a royal title which can casually be given to a girl.

The word princess in different languages has many names. It is for someone with spoiled habits. It’s either a word of dedication, or they’re suggesting the “princess” ‘ is a privileged individual depending on the situation and circumstances.