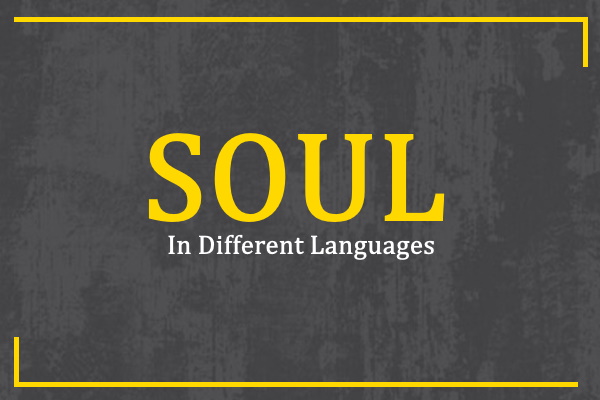 Soul in Different Languages: The spirit, in numerous strict, philosophical, and legendary customs, is the spiritual embodiment of a living being. Soul or mind involves the psychological capacities of a living being: reason, character, feeling, awareness, memory, recognition, thinking, and so on. Contingent upon the philosophical framework, a spirit can either be mortal or eternal.

Soul in All Languages

Translation of word Soul in almost 100+ different languages of the world.

Soul in Other Foreign Languages

Video Translation of Soul in 10 Other Languages

Numerous ways of thinking and religions state that a spirit is the piece of a living person which is heavenly and lives in the afterlife. It can’t be found by science, since it can’t be tried in any controlled manner. A wide range of assessments exist concerning what befalls individual experience in the afterlife.

SOUL IS MORE BEAUTIFUL THAN THE BODY.

Most agnostics state that there is nothing of the sort as a spirit, and that the body is the main piece of a person.

Reincarnation is a conviction that after the body bites the dust, the spirit will be conceived again in another body.

In Judaism and in Christianity, just people have godlike spirits. For instance, the Catholic scholar Thomas Aquinas ascribed “soul” to all living beings yet contended that solitary human spirits are unfading

Different religions hold that every living thing from the littlest bacterium to the biggest of well evolved creatures are simply the spirits and have their physical delegate on the planet.

The real self is the spirit, while the body is just a component to encounter the karma of that life.

Accordingly in the event that we see a tiger, at that point there is a hesitant personality dwelling in it (the spirit), and a physical delegate (the entire body of the tiger, which is perceptible) on the planet.

Soul in different languages has many names. Some instruct that even non-organic substances, (for example, waterways and mountains) have spirits. This conviction is called animism.