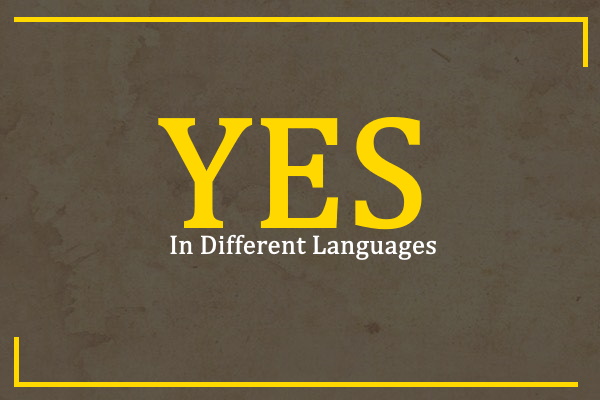 Yes in Different Languages: One of the basic words you need to know before learning a new language is Yes and no. These are words you are going to use the most. You can use it anywhere and anytime when you are asked about something.

Yes in All Languages

Translation of word Yes in almost 100+ different languages of the world.

Yes in Other Foreign Languages

Video Translation of Yes in 10 Other Languages

Do you want water? What will be your answer other than yes? (besides when you do not feel the need to drink water). Being a traveller you can use Yes when someone asks your opinion about something.

You never know when you will run into a situation like this. So, be prepared these simple terms can help a great deal. There are many ways to say yes in English.

If you are asked for a second bowl of ice-cream you will reply with a loud “yes”. But if you teachers ask about your preparation of exams, you will sound with a less enthusiastic “absolutely”.

There are many ways to say yes in English.

Yes is lovely but how about some other words of saying Yes? There are so many words you could use instead of yes like absolutely, of course, gladly, for sure.

Yes is a very flexible word that can fit into every situation and can be used anywhere in offices, school, friends. The use of yes tends to be very straightforward in some situations.

For example if somebody asks, “Have you seen my pencil”? Yes, does not give any clear answer instead you can use “yes, I do or I have”.

Informal: Some informal alternatives for yes are Yep and Yeah. They are used in a casual language when speaking with friends and family. Some other words are yaa, yaaay, totally, yup, yep.

Formal: Formal way of saying Yes is quite different. This format is usually used in offices and official letters. When an employee responds to his boss, he cannot be casual. Formals words for saying yes are certainly, definitely, of course, indeed, undoubtedly and gladly.

There are some words used in every language that makes answering a question much better. Symbols are used in some language and sometimes your body language speaks.

Your responses could be better understood when you learn to speak in the language of natives.

There are many ways to say yes in different languages. It means i know or ano.

Either at home, office, educational institute or even at road side it will be helpful for you to communicate.