12 Most Valuable Languages to Learn (Why to Learn) 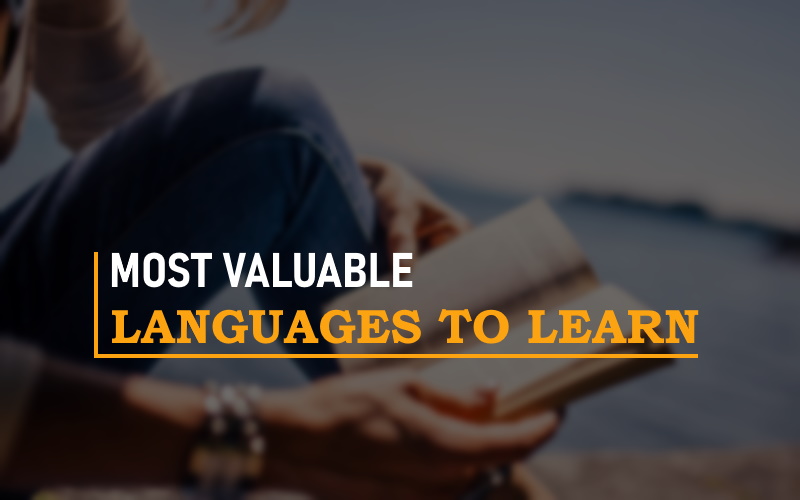 Today, becoming fluent in any of the most valuable languages to learn is virtually essential. The majority of companies are global, so multilingual candidates are in high demand. Certain languages will aid you in advancing more than others; not all of them are equal. Let’s learn together – which languages should you become familiar with in 2022?

Languages are Valuable for Many Reasons

The value of learning a language from the below list is beneficial in many ways. Some of them discussed below.

→The Number of Speakers

Prior to deciding whether to learn a language, it is crucial to know how many people speak it. Many people choose languages that are spoken most widely. Knowing this information will help you reach more people around the world.

The goal and interest of your organization play a significant role here. Are you planning to spend some time in one region of the country? Research the languages spoken in that region.

Choose one of the languages spoken on all continents, such as English, French, or Spanish, if you are interested in learning a language from most valuable languages to learn.

Consider the versatility of a language when choosing one. Are you able to use it both in your country and abroad? Can you use it both professionally and socially? Learn the language that suits you the best if you want to learn one.

Choose a field in which you are interested in working and a location for your business. Anyone working in the United States would benefit greatly from learning Spanish.

Different ways to learn languages that will be helpful to you if your business or industry expects to conduct a lot of international business. Examples include Chinese, Japanese, Italian, and German.

In this article, we have mentioned 12 important languages according to their learning value.

As the world’s largest economy, China has become a valued business partner for many countries. It’s open to any human on this planet, regardless of origin, whether they’re from Asia, Europe, or Australia. China’s role has increased exponentially on diplomatic and trade fronts – if you have already noticed this.

Apart from its manufacturing capabilities, the country has become one of the biggest buyers of imported goods globally due to its large population. Also, it has become a stakeholder in sustainability, particularly in areas such as green energy.

Learning Chinese is very valuable if you are planning to live or work in Asia, and it allows you to communicate in their language with nearly one in six people on earth (nearly a billion people!) Making it one of the most valuable languages to learn.

No doubt one of the hardest languages to learn. Even with its extremely complex pronunciation, Mandarin Chinese is quite easy to learn due to its relatively simple grammar structure and lack of verb conjugation and gender distinctions.

French, a language that never exclude, remains a viable option for strategic language learners. Because France is a major tourism hub, French is a good language choice for those majoring in tourism, working as tour guides, hotel managers, and more.

French is a valuable skill for anyone studying political science, working in diplomacy, or performing other duties requiring understanding of official languages.

A large percentage of the sub-Saharan African population also speaks French, so they have even more opportunities to work abroad. Can you already speak English or Spanish? Your French studies will be made easier because of the similarities between these two languages.

The fact that Spanish is one from easiest languages to learn for English speakers, spoken by about 12 percent of American adults does not mean that you should think of it as a waste of time. Spain is the only country where Spanish is an official language and it has the second-largest native speaker population after China.

Faculty members and graduates of foreign languages programs, politicians, immigration workers, and travel and tourism majors would be wise to add the language to their CVs. Being fluent in Spanish not only simplifies travel vastly in Central and South America, but it also makes Europeans feel more at home as many Europeans speak it as a second language or third language. In other words, Spanish is useful for a variety of reasons.

18 percent of EU citizens speak German as their mother tongue, making it the most widely spoken language in the EU. Luxembourg, Austria, Switzerland, and Liechtenstein also speak German as an official language. The German economy is a heavyweight throughout Europe and is a major exporter of goods such as pharmaceuticals and automobiles.

Foreign language classes in secondary schools across the world are growing rapidly due to the business opportunities this brings multinationals. Germany teaches German to millions of secondary school students around the world. Japanese students study German at an average of 68 percent. German tourists are among the most avid in the world from a leisurely point of view.

Because Germans enjoy a good standard of living and a reasonable amount of vacation time, they are natural globetrotters: their dollars go directly into the foreign tourism industry, so languages that speak German everywhere can benefit from this.

It was no surprise to me that Portuguese will be one of the most valuable languages to learn. Portuguese is spoken in 11 countries and regions including many African nations, Goa (India), and of course Brazil and Portugal, with a population of more than 200 million native speakers (expected to reach 335 million total speakers by 2050).

Resulting from the Olympics in 2016 in Rio and the World Cup in 2014 in Brazil, Brazil’s dominance is undeniable. In addition to the sun, food, and samba in Brazil, learning Brazilian Portuguese will make you more marketable across Latin America! Would you like to know more? Learning Portuguese is not difficult, especially for those who speak Romance languages, but native English speakers often overlook it in favor of Spanish or French.

The Arabic language evolved as a nomadic language spoken between tribes that moved around. Arab has also become the official language of the European Union in addition to being the language of the Arab League, which has 22 nations, including the United Arab Emirates, Egypt, Morocco, and Jordan.

It is worthwhile to learn Arabic for these popular travel destinations. There are many texts in Muslim civilization that are written in this language. The fact that Arabic is spoken by over 1.8 billion Muslims around the world is no surprise.

Many countries in Eastern Europe and Europeasia speak Russian as their second language. Additionally, Russian is the second language on the internet (after English) and has the highest percentage of internet content among European languages. Due to this, learning Russian is one of the most important things a businessperson in Europe should learn.

Outside of Japan, few people speak Japanese, but it includes in the list of most valuable languages to learn. Whether you take interest in the culture and food of Japan, or you’re fascinated by technology, learning Japanese can be very beneficial.

Additionally, it can be an excellent launching point for learning other Asian languages. Because Japanese contains Chinese characters and has a similar grammar to Korean, it puts you on the path to learning all three languages.

One of the most valuable languages to learn is Hindi. With its high number of speakers, it is one of the world’s most popular. The number of people who speak a language shouldn’t determine the motivation for learning the language; the motivation should be the culture that this language was derived from.

As India is today’s standing in the list of largest economy in the world, it makes sense for you to learn Hindi, which is the most widely spoken language in India.

Culture, history, and the arts are abundant in Italy. The language of many historical texts in Italy is Italian, and many sites there are world heritage sites. Knowing Italian will benefit you on a trip to this country, which is a popular travel destination.

It will also make it much easier for you to learn the others if you know any of these similar romance languages – Spanish, French, Italian, and Portuguese.

Learn the Korean language since Korean characters are phonological: the shapes are like those of your mouth when making a sound. With its unique writing system, the language is relatively easy to learn.

Most Useful Languages to Learn (Benefits)

The learning benefits of the above mentioned languages are in numbers, but the main benefits are:

Our world is becoming smaller and smaller as globalization rises. Many companies work across global teams or with foreign partners, so they expect applicants to speak at least two languages. If your languages are in demand, you will stand out on your applications if you are fluent in several of them.