10 Reasons Why English is Hard to Learn 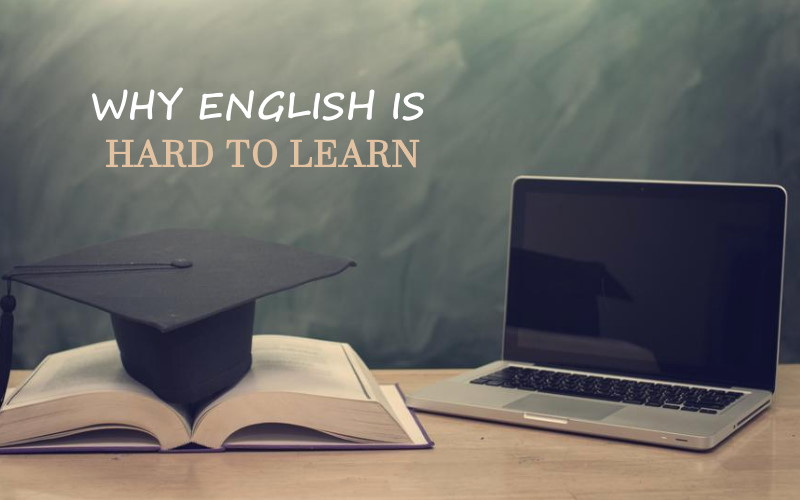 Have you ever wondered why someone who speaks Spanish, Chinese or Japanese as their native language finds why English is hard to learn? We sometimes forget the language’s structure and requirements simply because we speak it.

Words from other European languages can also be found in English, including those from Greek and Latin. Languages in the Indo-European family include English. For learners, especially newcomers, English is not easy. The fact that other countries have adopted English as their second language is even more surprising.

The English language is spoken with greater fluency in many countries around the world than it is in North America and Britain. Translations often involve the use of English as either a source language or a target language.

There are more than 1 billion English learners worldwide, according to data compiled by the British Council. But why is English so hard to learn?

10 Causes Why English Language is Hard to Learn

The English language presents many challenges to learners. The following are a few reasons why some people think that it is one of the hardest languages to learn.

Why English is hard to learn? For this question, there are specific ways in which English is difficult to learn. One of them is that the spelling scheme is complicated. English speakers are affected by this even if they are native speakers.

It is interesting to note that ‘dough,’ ‘tough,’ and ‘bough’ all have the same spelling but differ in pronunciation. This Middle English ‘-ough’ spelling is a relic of Chaucer’s time. Its pronunciation reflect in the spelling.

However, many of these pronunciations have changed over time. However, the spelling has not changed.

Despite living in an English-speaking country, even native speakers make mistakes related to punctuation. The trickiest part of writing is the style. How to Use Hyphens in Compound Nouns or how to use the fast Oxford coma of today.

New things are coming up every day. Grammar is the most specialized area of the English language. In addition, the strange case of the English pronoun “I” deserves mention. In contrast to all other pronouns in English, “I” is the only one written in capital letters, no matter its form.

The number of languages spoken in the world has risen to about 6,000 today. When viewed from a scientific perspective, languages can be viewed as families. Each belongs to a specific family and evolves from another.

Japanese has little in common with Romance or Germanic languages. As a result, their sounds and appearance are quite different.

To put it another way, how is pineapple related to the words “pine” and “apple”? Nouns become verbs in some cases as well. Preachers, for instance, preach while teachers teach.

Why English is hard to learn? It is hard for English learners to grasp these inconsistencies, so imagine how hard it is for them.

When you speak English fluently, you can immediately recognize the word order. Identifying right and incorrect word orders is another challenge for students.

There’s no good reason for setting the words in a way to make them sound right.

A small interesting cup is correct, but a small cup that is interesting doesn’t sound right. It may be grammatically correct, but its pronunciation will determine its meaning. The complexity of the language is intuitive to native speakers.

English is a language fill with rules, the same as any other. It is either grammatically correct or used to assist in spelling. A lot of them exist.

You can change, refute, or prove them wrong in many ways. It is common knowledge that English students should pronounce “I” before “E,” except after “C.” This rule stands true for most English words, including “friend” and “believe.”

Science and weirdness are exceptions, but most native English speakers know how to pronounce them. Having a comprehensive knowledge of the rules and exceptions.

Language learners may have a nightmare attempting to learn the language. Not every rule applies. Using established knowledge when applying a rule to a new word is important.

Learning idioms is another not easy task that includes every. They are not meant as literal expressions. “She kicked the bucket,” for example, simply means she died. That’s all you need to know.

There are two other examples of this: ‘She jumped down my throat and ‘He hit the roof.’ These are not exactly the same in the literal sense. A language learner may not understand idioms like ‘all of a sudden. The English language has more than ten thousand of them.

There are idioms in every language. A characteristic of English idioms is their length, variety, and unpredictable nature. Why English is hard to learn? In English, idioms often prove difficult to understand for those who do not speak the language natively.

According to specifics, 26 percent of English vocabulary comes from Germanic languages. About 30 percent of the vocabulary is French and 30 percent Latin. Because English has a mixed vocabulary, French speakers may find it easier to learn English.

For Dutch and German speakers, the same holds. If we gain a head start, learning a language becomes simpler.

Synonyms are Synonymous but not always:

You’ll find many word groups that are generally equivalent in meaning in a thesaurus. This is because different words in English can have different meanings.

There are many different meanings of the same word. A misunderstanding of the word may result in some instances. It would never be acceptable to “watch a film” or “see a film.” Another example is saying, “I received a gift,” not “I welcomed a gift.” Even though the words are similar, their meanings may differ depending on their context.

9. The Plurals and Tenses Are Difficult:

It is important to note the different tenses. Identifying future tense from future perfect can be confusing for English learners. Learning grammar rules from the text is not the only tough part.

However, the speaker may also speak of the future when having an English conversation. Also, there are several variations in the way plurals use in English. In the case of non-native speakers, adding -s to form plurals is incorrect for words like mouse and ox.

Why English Grammar is Difficult?

There is a fundamental difference between the mother tongues of our learners and English that influences their perception of grammar most of the time. Slovakian is a typical synthetic language with a significant amount of affixation and a relatively stable set of grammar rules.

Despite this, English is a much more analytical and dynamic language, and grammar rules are used much more freely. It is also apparent in pedagogical grammars: In the Slovak language, when explaining grammatical characteristics, terms like “always, always”, “never”, and “must not use” are most commonly used, whereas in English there is a tendency to use terms like “normally, usually, etc.”.

This difference impacts how grammar rules are understood. Slovak grammar relies heavily on clear, unequivocal rules that are sometimes difficult to memorize but are relatively stable over time.

A speaker’s intention determines the application of grammar rules and an individual structure’s function, and the context (linguistic, textual, and situational) plays a major role.

Mastering English grammar requires a tolerance for such ambiguities for the rules to fit into the student’s system of grammatical knowledge. As a result, learners of Slovak might lack the ability to tolerate ambiguity and be flexible in their metalinguistic reasoning (grammatical) thinking.

Is English the hardest language to learn? A lot of rules exist in English, but there are exceptions to every rule, which is one of the things that confuses about it. It goes against that rule though when words like a receipt, weird, and science are used.

Similarly, irregular verbs, which differ from their past tense spellings in a way that is contrary to normal logic, are another confusing contradiction. Other things make learning English confusing for non-native speakers other than spelling.

English learners can also frustrate by pronunciation irregularities. The pronunciation of words in English is so varied that words that have nearly the same letter groupings can be pronounced in many different ways.

The number of people who learn English worldwide is hundreds of millions. English ranks third on the list of native languages studied. It is not uncommon for English-speaking adults and children to enroll in an English course. But why English is hard to learn?

Actually this language is challenging for learners and native speakers alike due to its unpredictable spelling and complex grammar. Any language you learn will be challenging since the similarity between your original language and the target language is so important. Learn a new language by yourself doesn’t mean it is impossible.