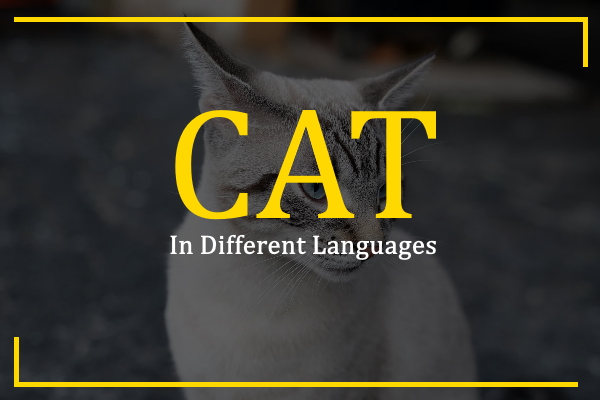 Cat in Different Languages: Cat is a small carnivorous mammal generally kept as a pet. It has a small flexible body; it’s got sharp teeth and claws. It has night vision and a well-developed sense of smell. Cat speaks the language of her body, roaring, grumbling, hissing and grumbling.

Cat in All Languages

Translation of word Cat in almost 100+ different languages of the world.

Cat in Other Foreign Languages

Video Translation of Cat in 10 Other Languages

With over 9,500 years of human interaction, cats are highly intelligent creatures. Known to hunt over 1,000 species of animals, they are carnivores and extremely skilled hunters. Find out more about cats by reading on.

Around 10,000 years ago, the Near Eastern wildcat roamed the deserts of the middle east. Its appearance was not much different from what we see today. Nevertheless, the Near Eastern wild cat was fierce and feral, while the domestic cat has become the world’s most popular pet due to its adaptability and tameness.

Domestic cats were first discovered in Kazakhstan. During excavations at the early medieval city of Dzhankent, a well-preserved skeleton dating to around 775–940 cal CE was discovered. Ancient Egyptians worshipped the cat goddess Bastet. Cats have been depicted in carvings found in ancient Egyptian tombs.

Cats were very important in ancient Egypt, and the people considered them to be demi-deities. Their goal was to stop the spread of disease by protecting the crops and killing rodents. There are many different types of cats in many different countries, so we should learn more about the cat in different languages.

Different words are used for a cat in different languages. In the Finnish language, the word “Kissa” is used for cats. “Gato” is the Portuguese word for cat. “Mao” is the word used for cats in Mandarin.

Myths About Cats in Different Countries

There are many myths about this cute animal. A black cat is believed to be unlucky in the United States and many other places; in the United Kingdom, it is thought to be good luck.

According to Japanese culture, calicos with three colors are lucky. Russia considers it good luck for the first person in a new house to be a cat. A Chinese myth states that the Cat detests the Rat because he deceived it.

Cat as a hunter, there is a myth in Nigeria that cats hate rats because she was blamed for a theft committed by the rat or mouse. According to Italian folklore, cats are either good or bad tricksters. A snow leopard’s destructiveness causes Mongolians to distrust cats.

Throughout Native tribes of the Appalachians, tales of the Wampus cat are told, but the Cherokee believe Wampus represents the spirit of a woman who fought a demon to avenge her husband.

Depending on how they are treated, Fair Folk may cause mischief or bestow great blessings, according to Celtic legend. Some Asian countries believe that a cat is the aunt of a lion.

Some words used for the cat in different languages are very strange for English speakers. Korean word for cat is “goyang-I” and the Vietnamese word for cat is “con mèo”. For more interesting words for cats, see our table.