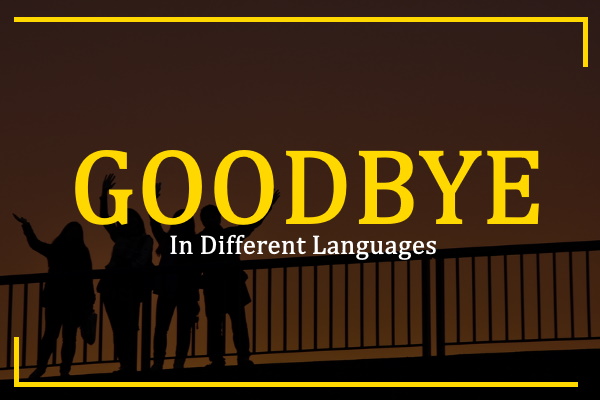 Goodbye in Different Languages: Goodbyes are said when you are leaving a place, ending a phone call or biding a farewell to someone. Goodbyes are the informal way to end a conversation for the people you know. Don’t be sad while saying goodbyes, a farewell is necessary before you can meet again. Some goodbyes are really painful when you two will never meet again.

Goodbye in All Languages

Translation of word Goodbye in almost 100+ different languages of the world.

Goodbye in Other Foreign Languages

But still some make happy because it gives hope of meeting again. Like saying a “see you soon” is less harsh. There are many ways to say goodbye depending upon of the language of that particular country.

There are some basic words of every language that learners pick up very easily like goodbye, farewell, see you soon, nice to meet. These are the words of daily use with nearly same meaning.

There are some formal and informal tone of words all of which are used on regular basis. Goodbye itself is a very formal word.

There are some situations for which goodbye is the most appropriate like breaking up with someone. This type of goodbye can’t be used in offices.

Farewell: farewell is an emotional phrase usually said when you’re not going to see that person again. It is to wish someone luck.

Have a good day: It is more formal and used for people you do not know much.

Take care: Take care is for people you know. This word is used for someone really close. It is quite less formal than have a good day.

Bye: Bye is the most commonly said goodbye in English. It is mostly used with people you know like friends and family.

Bye Bye: It is the most casual tone of goodbyes and sounds a bit childish.

See you later: You can use this with anyone you’re talking in person. Or you can say “talk to you later” before hanging up the call.

All the best: it is used to wish someone luck for their future.

Every language has its own specific words. Learning a language can introduce you to some new words and make it understandable.

Goodbye is not just confined to this word, there are certain phrases in every language which can be used instead.