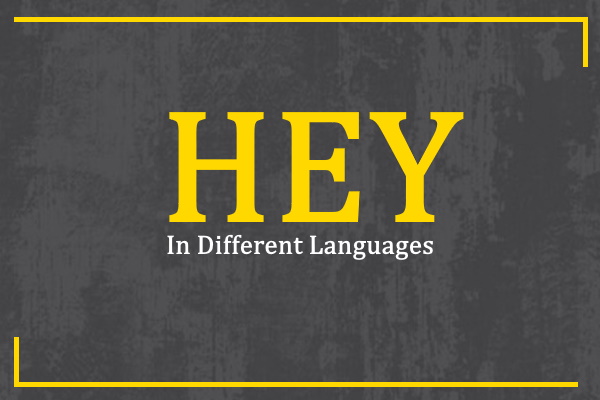 Hey in Different Languages: Do you like travelling? The first point of making an interaction with the locals is to learn their way of greeting. It is the basic to initiate a conversation. Starting a communication with Hey sounds polite and shows your interest to communicate even if you can’t speak it well. It shows that you’re trying to speak a language you’re not familiar with which is quite usual to face difficulty in switching from one language to the other.

Hey in All Languages

Translation of word Hey in almost 100+ different languages of the world.

Hey in Other Foreign Languages

Video Translation of Hey in 10 Other Languages

Hey always does a gracious favour in striking a conversation better.

Greetings make a relationship better and leave a good impression on people you meet. It makes your personality effective and charming.

Greetings could be with a stranger you meet, your boss and your friends.A simple HEY shows your interest to the person. Simple greetings introduce you to new people.

Initiating a conversation ensures confidence to you and shows your activeness. It teaches you that people don’t bite and there’s nothing to fear.

In business it is an integral part to say hey and greet everybody. It helps you connect with people and removes hesitation among employees.

Imagine you go somewhere and greet people in their language, they’ll surely stop and greet you in return. I will put a smile on their face. It is a reminder to let people know you care.

There are two types of greeting formal and informal. This shows the whole point of conversation. You can use a formal HEY or an informal Hi. Also use hello or how are you.

When you do not know a person try to say Hey in a very formal tone like for offices and elderly people. When you’re interacting with the locals of another country you can used a casual tone because it sounds very friendly.

Or sometimes when you do not know a person wait for them to speak first. The formal and informal greeting differ by language and area.

If you learn to say HEY in different languages it will express yourself more precisely.

For example in Chinese formal and informal greetings are different.

Nĭ hăo: Hi, Hey. More casual. It is usually used for individuals and not for groups.

Nín hăo: Hey, You good? Used as a formal greeting.

The difficulty that most people face when they go abroad is a language barrier. Not many languages are taught in our curriculum. We’re helping you to learn basics of the most spoken languages. It will be useful wherever you go. Hey is very common word which we use in our daily routine like welcome and bye.

Do you want to be a cool chic and want to astonish your friends with new ways of greeting? We’ve got your back. You can learn to say HEY in different languages and teach your friends too.