Nothing in Different Languages 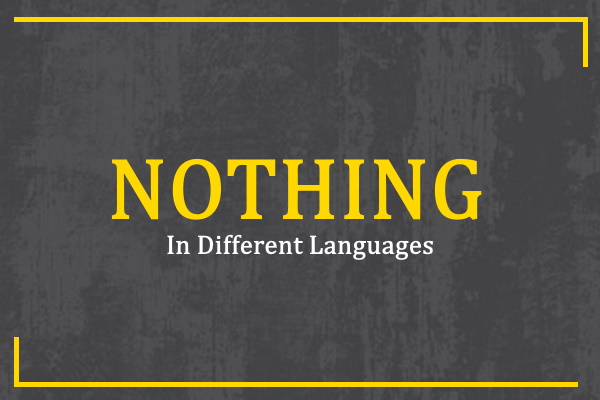 Nothing in Different Languages: If we analyze then even a single atom or an electron carries some importance and weight to its meaning and existence but the above heading, nothing is a pure reflection of something, what we can say, Blank.

Nothing in All Languages

Translation of word Nothing in almost 100+ different languages of the world.

Nothing in European Languages

Translation of word Nothing in almost 42 European languages.

Nothing in Asian Languages

Translation of word Nothing in almost 36 Asian languages.

Nothing in Middle East Languages

Translation of word Nothing in 4 middle eastern languages.

Nothing in African Languages

Translation of word Nothing in almost 13 African languages.

Nothing in Austronesian Languages

Translation of word Nothing in almost 10 Austronesian languages.

Nothing in Other Foreign Languages

Video Translation of Nothing in 10 Other Languages

More Information about Nothing

Something that resembles what absence look like in a shape of word. Nothing word is a regular used word in daily lives and the word is purposeful but the action which it represents is quite off and not meaningful.

Nothing has different definitions for different set of people with different Socio economic classes like for some nothing means genuinely not having anything in their lives including basic necessities like food, cloth and shelter.

While for some nothing means not having regular meal three times a day or living in small apartment with hand to mouth income.

But for few individuals, travelling a world is nothing for them or living a luxurious life is nothing but emptiness. This proves that how the definitions differ from person to person who are in different stage and aspects of their lives.

Hence the word is representing what is nonexistent and we can take example from religious facts “God created this universe from nothing” hence the word is fulfilling its purpose of something that never was there in the first place.

The word is originated from old English Nan thing which means nothing, and nothing is modern English. People used word nothing in different ways.

While in Greek its Tipota, in Spanish its Nada, in mandarin it’s Meiyou. The irony of ‘nothing’ is that the universe was created through this word and this amplifies its importance that technically it would be the first word that has some meaning ever revealed from even before the start of universe.

Nothing in different languages has many names and this word is used in many ways. Mostly used to define zero quantity.

From my perspective this word lies in only those souls which are suffering and gloming due to lack of something they desire or wish, otherwise they are blessed with everything and not nothing.

You can say nothing in other words like not a thing or nill.