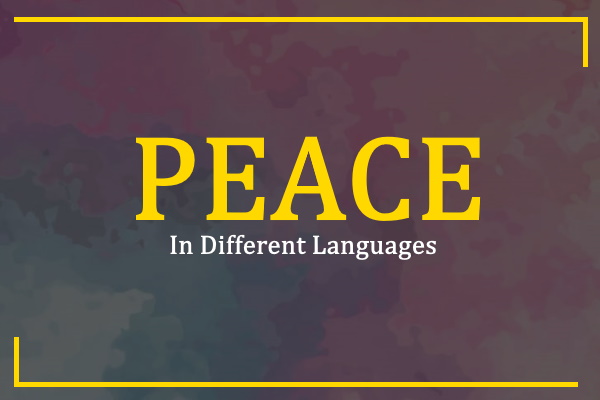 Peace in Different Languages: Peace is a state in the absence of hostility and violence. We can also define peace as idea of societal friendship. Peace is commonly used in a social sense to mean a lack of conflicts, like war and freedom from fear of violence among groups or individuals. Peace is when you can solve your conflict without violence and work together to improve the quality of your life.

Peace in All Languages

Translation of word Peace in almost 100+ different languages of the world.

Peace in Other Foreign Languages

Video Translation of Peace in 10 Other Languages

Everyone has their part in society either rich or poor and both deserve equal rights. Peace could be possible when none of them is put superior to each other and there is no discrimination on justice, law, and social rights. Each part plays its own significant role in the society.

Conflicts arise when the rights of one group is suppressed and this disturbs the peace of whole society.

Everyone has basic necessities of life such as food, shelter, water, education etc. In this society of race peace is very difficult to achieve. Countries strive for wealth and power.

They want to control and eradicate other countries. We’ve seen so many examples where a giant successful country took over a smaller one. People lost their houses and were brought to slavery.

Many believe that being internally “in peace” is a healthy mental condition or hemostasis and the opposite is a feeling of stress, anxiety and emotional.

In meditative traditions “peace of mind” is often associated with love and happiness and happiness in psychological or inward achievement.

Peace of mind, serenity, and tranquillity are descriptions of a disposition without stress effects. In some meditative practices, inner peace is considered to be a state of consciousness or illumination created through different kinds of meditation.

Psychological peace might not be well described but is often a necessary precursor to “behavioural harmony”.

Peacemaking is sometimes the product of a “peaceful inner attitude.” There are many ways to say peace in different languages.

A peaceful society should be less hostile and have a positive approach to avoid conflicts and make this society a better place to live in.