Thank You in Different Languages 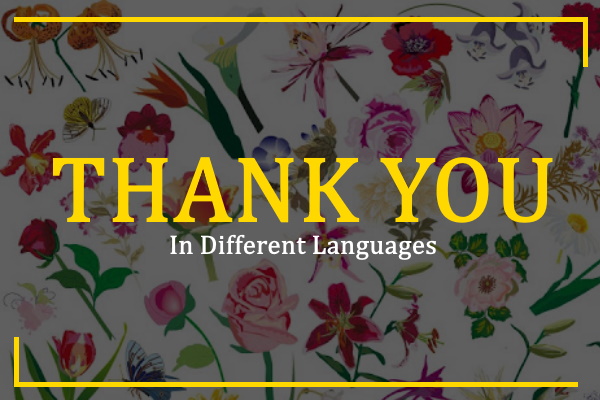 Thank You in Different Languages: Do you like to know about different cultures or do you have interest in learning languages? Or are you a traveller and belong to a country where other languages are not widely spoken, this is for you. Doesn’t matter wherever you go etiquette and gratitude remains the same everywhere. The words you say and the gestures you show say a lot about you.

Thank You in All Languages

Translation of word Thank You in almost 100+ different languages of the world.

Thank You in European Languages

Translation of word Thank You in almost 42 European languages.

Thank You in Asian Languages

Translation of word Thank You in almost 36 Asian languages.

Thank You in Middle East Languages

Translation of word Thank You in 4 middle eastern languages.

Thank You in African Languages

Translation of word Thank You in almost 13 African languages.

Thank You in Austronesian Languages

Translation of word Thank You in almost 10 Austronesian languages.

Thank You in Other Foreign Languages

Video Translation of Thank You in 10 Other Languages

More Information about Thank You

Saying a Thank you to someone can make their day. Language might differ from place to place but a simple THANK YOU is a motivating force for everyone.

THANK YOU is a very simple word which will force people to talk about your kindness. MANNERS MAKETH MAN; it is rightly said so a person with good manners is always look upon.

If you’re a traveler I think it is necessary to learn the basic words in the language of country you are visiting. It helps you communicate better.

A word of gratitude leaves your good impression on people. You will feel that locals are mostly friendly with the tourists and appreciate the common language.

They are eager to help and a Thank you in their language will leave a smile on their face.
Learning many languages in difficult but trust me it is worth the effort.

Have you ever thought how important it is to be polite? Especially when you’re a traveler and do not know much about a culture.

To show gratitude is the way towards hearts. It is important to express your love it will leave a good impression of you.

As Will Rogers (American stage and motion picture actor) once said: “You never get a second chance to make a first impression”. So you have to count on it from the first time. First 30 seconds of an impression lasts for a lifetime.

Showing gratitude by saying words simple as Thank You doesn’t sound that hard, does it?
Saying a sincere thank you to a person who helped you is a great way to express your appreciation towards it.

Learning to say thank you in a different language is not only fun but can be a great way to gain the attention of those around you and to show your politeness when visiting another country.

In some parts it is not necessary to say thank you. It is sometimes expressed with actions or signs.

In Japan, people often bow to one another to show their thanks rather than actually saying the words.
In China, it is more common to say thanks with a thoughtful gift rather than words.

You can’t always give gifts to thank people. That would be impractical. Thankfully, gifts aren’t the only appreciated gesture of gratitude.

Expressing gratitude is one of the easier aspects of courtesy. We will teach you how to say THANK YOU in different languages.

Which will help you to greet people in their way. We can use word thank you in different ways. Some people say thank you very much.