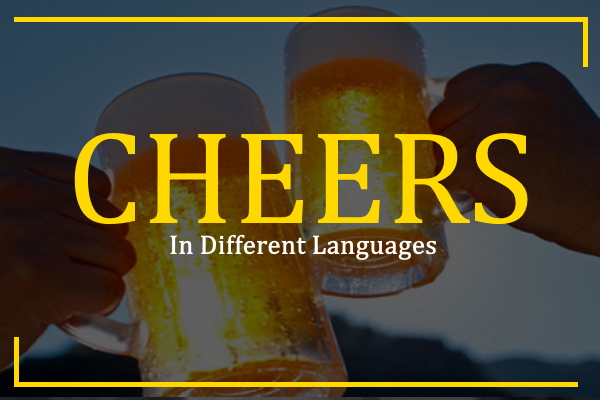 Cheers in Different Languages: A beautiful night of drinking after the whole week grind of work sounds a great idea. It sounds even better when you are a traveller. Sometimes crazy friendships begin with just a glass of drink.  But remember to use it responsibly because drinking is prohibited in some countries so you must learn an appropriate way to cheers.

Cheers in All Languages

Translation of word Cheers in almost 100+ different languages of the world.

Cheers in Other Foreign Languages

Video Translation of Cheers in 10 Other Languages

There are some regional pronunciations according to the area of that country. Besides ‘hello’ and ‘thank you’ cheers is also an important word you need to learn as a traveller, “Meet you at the bar at 8” goes to “cheers” at the bar.

Plus you do not know who else can you meet at the bar. Eating together is one of the biggest social activities of which the most interactive is sharing a drink. In The Odyssey by Homer, Odysseus drinks to the health of Achilles.

During the first century B.C., the Roman Senate made it law that people must drink to the health of Emperor Augustus at every meal.

The first toast in England allegedly occurred several centuries after that, at a feast in honour of British King Vortigern in 450 A.D.

Basically, ever since humans drank the first beers 7,000 years ago, they’ve been thinking of things to drink to.

So, the drinking is not new and it has been there for ages. People shared drinks on feasts and night out parties. In some countries drinking is a tradition and people are more habitual of drinking at different events.

A common belief in European countries is that if you don’t make eye contact when clinking glasses, you’ll get seven years of bad luck.

Spain has a similar superstition that if you try to toast with water instead of alcohol, you’ll get the same curse.

Cheers:  Cheers to good health before drinking remains customary around the globe. But why do we clink glasses? It was a view that you can prevent yourself from getting intoxicated by clinking the glasses.

Fill your glass to the top and while clinking you alcohol may pass to another person’s glass. Saying cheers is a way to stay safe from evil spirits the sounds of glasses clinking would scare demons and spirits away.

Next time you visit a country and share a drink do notice their motions and follow tradition. Say it loud to locals “cheers”.