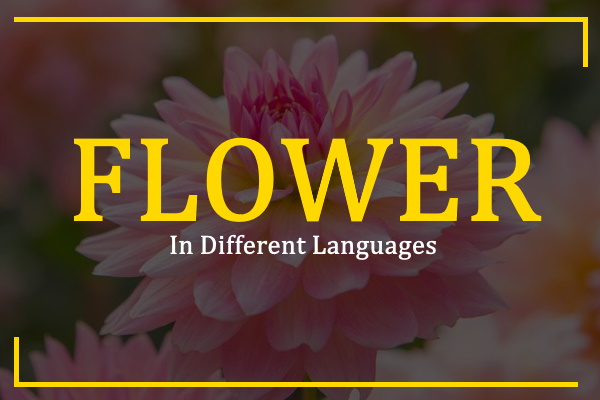 Flower in All Languages

Translation of word Flower in almost 100+ different languages of the world.

Flower in Other Foreign Languages

Video Translation of Flower in 10 Other Languages

Flowers are the colourful parts of a plant. When flowers are growing on a plant, we call it as “flowering”.

There are numerous kinds of flower in this world. Usually, flowers bloom for a few months in spring season. Flowers vary in their structure and form. They either grow separately on a plant or grow in a cluster.

Their floral shape also differ which help botanists to find out about their evolutionary history. Some flowers depend on wind for the pollen’s to transfer.

Red roses symbolise love and passion. Because of their colorful appearance flowers are used in decorations. People like to plant flowers in their gardens.

Flowers are also loved in perfumes and scents. Flowers are used at almost every event like birthdays, celebration, birth of a baby, wedding ceremony of a funeral.

At funeral flowers show gratitude and respect; they are just an expression of showing love to the departed soul.

Flowers are also being eaten like broccoli and cauliflower. Saffron, the most expensive spice also comes from a flower. Honeybees collect flowers nectar and process t to make honey.

Due to the appealing colourful beauty of flowers, they are favourite subject of many artists. Some of the most liked are of flowers. Some poets also praise its beauty like we see on the poem “daffodils”.

Flowers are significant in almost every culture and gives a soothing effects to see.