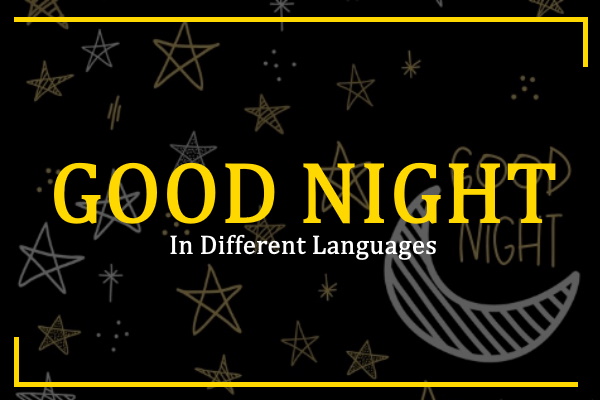 Goodnight in Different Languages: Goodnight is word to bid farewell to someone before going to sleep. Behind this custom there is no real historical claim. It’s just a sort of good wish as it is nighttime and nighttime to go to sleep and since bad dreams and since horrible dreams and sleeplessness both lead to hallucinations, you can wish them to ‘ have a good night ‘. Good night is often used as an expression to mean that I hope you have a good night.

Good Night in All Languages

Translation of word Good Night in almost 100+ different languages of the world.

Good Night in Other Foreign Languages

Video Translation of Good Night in 10 Other Languages

There are different words for saying good night. Night or nighty night is a nice way to say good night. It is often used to put a child in bed and mean ‘ sleep tight ‘. Good night is a kind of greeting.

Even if it’s not sleep time and two people depart at evening, they may wish goodnight. Goodnight is very often paired with the word Good evening.

You could wish someone goodnight in evening, but you cannot do the same before evening because it would sound really weird to say goodnight in the daytime.

Sending a goodnight text is good idea. It improves the bonding among people. Goodnight is a common tradition all over the world.

It means that ‘You be safe’, ‘protected from bad dreams’, ‘have a good sleep’.