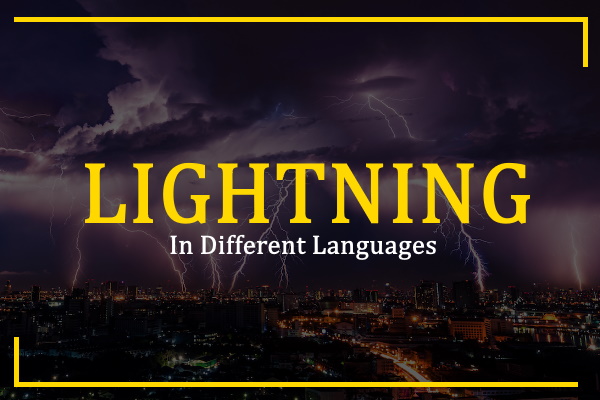 Lightning in Different Languages: Lightning is an electrostatic discharge that occur naturally and that temporarily equalizes two electrically charged regions in the atmosphere or earth that produce an immediate release of as much as one gigajoule energy.

Lightning in All Languages

Translation of word Lightning in almost 100+ different languages of the world.

Lightning in Other Foreign Languages

Video Translation of Lightning in 10 Other Languages

This release can result in a wide variety of electromagnetic radiation, ranging from hot plasma produced by rapid electrons movements to blinding flashes of black body radiation in visible light.

Lightning creates a thunder a sound from the shock wave that occurs in a quick increase in pressure when gasses reach the discharge. Lightning also happens during thunderstorms and other forms of energy-intensive weather systems.

The most lightning appear within the cloud but also sometimes between the air and the ground. A positive charge builds up below the cloud in the ground drawn by the negative charge at the cloud edge.

Lightning is not just amazing; it is risky and dangerous. Every year about 2,000 people around the world are killed by lightning.

Thousands of attacks often continue to survive but have a variety of symptoms such as memory loss, dizziness, fatigue, depression, and other life-altering disorders.

Strikes will lead to heart failure and extreme burns, but nine out of 10 recovers. There are many ways to say lightning in different languages.

The average American has nearly 1 in 5,000 chances of getting struck by lightning. Lightning is the hottest thing on earth.

Extreme heat from Lightning vaporise the water within a tree which produces steam that force tree to break into pieces.