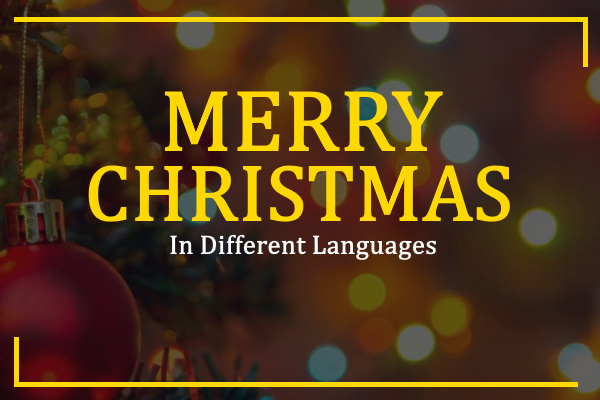 Merry Christmas in Different Languages: Christianity is the first largest religion in the world. About 70% of the world population is Christian. Christians live all around the world. They are the believers of God that there is one God who created heaven and hell. Christmas is a festival commemorating the birth of Jesus Christ celebrated as a holiday. It is celebrated on 25th of December followed by a holiday.

Merry Christmas in All Languages

Translation of word Merry Christmas in almost 100+ different languages of the world.

Merry Christmas in Other Foreign Languages

Video Translation of Merry Christmas in 10 Other Languages

By this time most of the preparations of the Christmas would have been done because it is just around the corner.

You’ll probably be in a holiday mood and have big plans for Christmas. Santa Claus give beautiful gifts to the children during the Christmas event.

A common greeting we come across on Christmas is saying “Merry Christmas” to everyone. Merry Christmas comes from a word which means to send “good will” to all. It is to wish others a happy and joyful Christmas season.

On a Christmas it is ritual to visit church in the morning and say prayers. Evening is followed by feasts in which family gathers and have dinner.

People receive gifts from their loved ones. Christmas trees are decorated a night before. People decorate their houses for this festival. The traditional colours for the decoration are red, green and gold.

These colours are chosen because of their symbolic importance for Christians. The flowers, candles, candy canes, plates, wreathes and angels are common decorations.

Both the displaying of wreaths and candles in each window are a more traditional Christmas display.

Christmas light and banners are hung along the streets, music is played on large speakers and Christmas trees are placed in all important places. A traditional family meal is mandatory on Christmas. The food varies from place to place.

On Christmas friends exchange cards with illustrated messages of greeting and love. Christmas is celebrated all over the world and people greet each other in different ways.

Why not learn to say “Merry Christmas” in different languages and greet people in a different way? Sounds a good idea.

You can learn this greeting in the top spoken languages of the world. With the spread of technology it is not difficult to send a message from one part of the world to another.