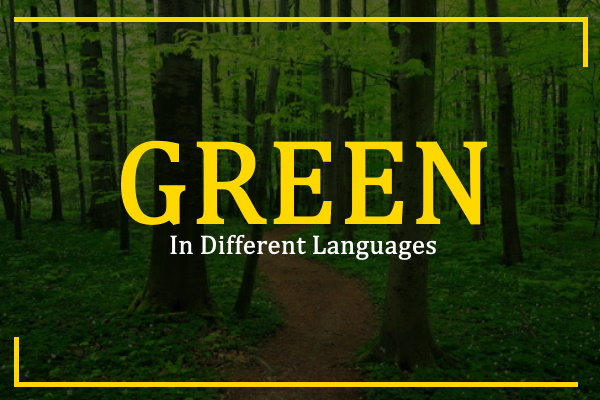 Green in Different Languages: Green is the color that comes between yellow and blue. It has a wavelength of 495-579 NM. Green is created by combining blue and yellow. It is one of the main pigment colours, together with the red and the blue combined with the other shades to create different colours.

Green in All Languages

Translation of word Green in almost 100+ different languages of the world.

Green in Other Foreign Languages

Video Translation of Green in 10 Other Languages

Green was strongly associated with luxury, traders, bankers and upper classes during post-classical and early modern Europe when red was known for the nobility. For this the dress of Mona Lisa was painted green.

It is also the colour of Ireland and Gaelic culture that has a long historical tradition. It is Islam’s historical colour, representing Paradise’s lush vegetation.

Green is related to the importance of development, peace, freshness, health and fertility. The green colour has a healing effect and the most relaxing and restful colour for viewing the human eye.

Green could contribute to perception and peace. Green is one of the most important colours in China that represents money and wealth.

The colour green is Included in many world flags and symbolises unity. It restores and renews energy that is depleted. It is the place of refuge away from the stresses of modern living and makes us feel good again.

That’s why there’s so much of this colour of relaxation on the earth that we must keep.