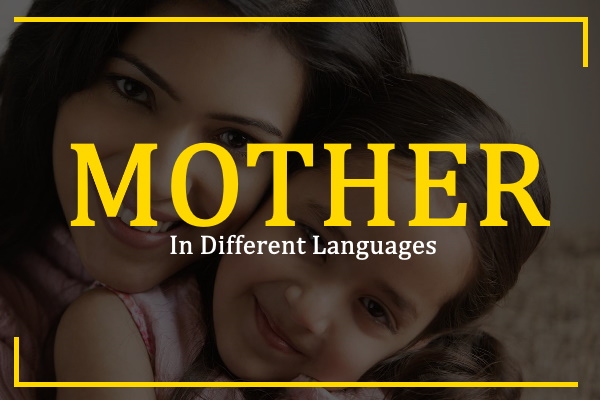 Mother in Different Languages: Mother is a female parent that gave birth to you. Mother word is not just confined to giving birth, mother is anyone who grew you, took care of you. It is also a word for elderly superior. The moment a child is born, the mother is born as well. The woman has existed before, but the mother is born after a baby. There is no love like mother’s love. Whenever we hear the word mothers, love is always associated with it.

Mother in All Languages

Translation of word Mother in almost 100+ different languages of the world.

Mother in Other Foreign Languages

Video Translation of Mother in 10 Other Languages

There is no love like mother’s love. A mother bears so much pain to bring another soul in this world, takes care of it, feed it, teach it and develop children’s lives.

A mother’s love is like no other the softness in her tongue that glow on her face when her child achieves something is something most beautiful.

You can see how your mother smile by hearing a simple “I love you” from you. It is just like all her life’s struggle just paid off.

When somebody’s father dies mother plays the role of father herself, she works hard day and night, earns enough to pay your fees and fulfil all your wishes like father did. There is no replacement for mother’s love.

MOTHERHOOD: ALL LOVE BEGINS AND ENDS THERE. (Robert Browning)

How true this line is! Mothers are always fighting for the sake of her children. You are the reason why she never gives up.

Mothers have a chance to see the children for their pure love and hold that love as the pillar of their education.

They can potentially add knowledge, kindness, and Beauty to an all too often cruel and hideous world with every child growing up living in love, believing in the power of love.

There are many ways to say mother in different languages. We can also said mom. Different words for mother can be used.

For the future of children, the future of our planet, what would be more significant? The feelings of motherhood remain the same everywhere.

This is not also different in animals. They shelter their children with and keep them away from hunters and might even die saving them.

Mothers have a power to shape the society. Whatever a child learns first comes from his mother’s upbringing.

THE ART OF MOTHERING IS TO TEACH THE ART OF LIVING TO CHILDREN. (ELAIN HEFFNER)