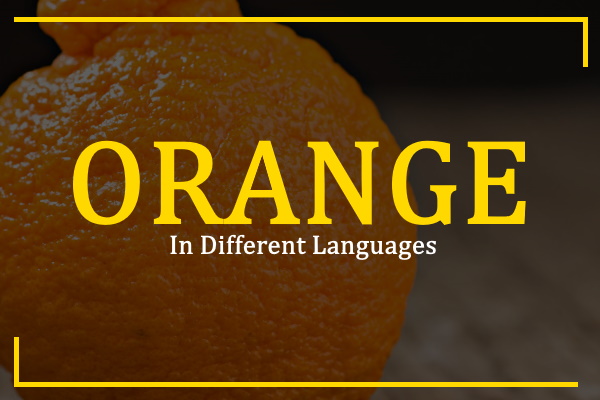 Orange in Different Languages: On a spectrum of visible light, Orange is the color between yellow and red. If you encounter light with a prevailing wavelength of around 585 to 620 nanometers, human eyes detect orange. Orange is a secondary. It also has a fruit of same color and name. In ancient Egypt, for tomb drawings and other purposes, artists used the orange mineral pigment known as real gar.

Orange in All Languages

Translation of word Orange in almost 100+ different languages of the world.

Orange in Other Foreign Languages

Video Translation of Orange in 10 Other Languages

It was also used for painting manuscripts by medieval artists. The color orange was present in Europe before and during the late 15th century, but without a name.

In the late 15th and early 16th centuries, the Portuguese merchants managed to bring Europe the first orange trees.

Orange increases appetite and is often correlated with vitamin C and a healthy diet, this is the reason it appears in many citrus fruits.

Orange is a common color for the sensation of hunger and joy. Orange color is very noticeable, often used to attract attention.

Surveys in Europe and America reveal that Orange is by far the most common color in the autumn associated with extroverted, hot, light, strength, movement, danger, taste and fragrance.

Orange encourages a general sense of well-being and emotional energy, such as love, enthusiasm and warmth Orange helps a person recover from deception, a heart injured, or a blow to the pride of oneself.

There are many ways to say orange in different languages. Orange color improves meditation when it is abundant in your surroundings which is the reason it is a spiritual color.