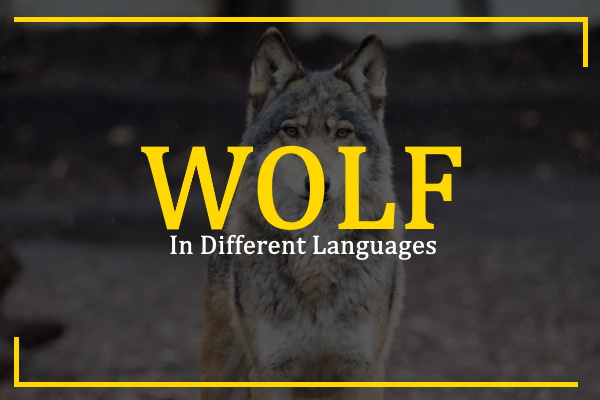 Wolf in Different Languages: What image would come into your mind when you hear the word wolf? A grey white big animal with fleshy tooth, sharp senses, small canine teeth, sturdy jaws and ability to search for prey at 60 km / h. Wolves communicate by their terrifying loud howl which others can easily detect. A lone wolf howls to communicate with other pack of wolves. Wolves inspire adoration in every language.

Wolf in All Languages

Translation of word Wolf in almost 100+ different languages of the world.

Wolf in Other Foreign Languages

Video Translation of Wolf in 10 Other Languages

Due to its characteristics it is romanticised in many poems and books. Juke like dogs wolves can start howling because they heard another wolf nearby.

Wolf is a very dangerous non-domestic specie of dogs that inhabits vast areas of Northern hemisphere. A northern male is about 2 meters or 6.6 long, including the fluffy half-metre long tail.

Its weight ranges from 13 to 65kg depending upon the area. Females are about 20% smaller than the males.

Throughout western Central Canada, Alaska and throughout North America, the largest wolves are found. In the Middle East, Arabia and India, the little appears to be near to the southern end.

In the early times humans hunted wolf and their skin was used to save them in freezing cold. Wolf was also used for transportation. But in the recent times we see wolf as a dangerous animal.

The primary reason for killing wolves in nearly all the United States was depredation of livestock. Many wolves were killed in US by different means. In 20th century their killing was stopped, and species was conserved which allowed their growth.

Wolves are more popular now than any other times recorded in history. This is due to their distinct lifestyles, habits and population.

Although wolves are very dangerous, but they can get really attached to people when plenty food is available. They are loyal to their owners and caretakers but still these animals are hard to trust due to its wilderness.

With visual markings (facial expression, body position, tail position), vocalisations and scent marking, wolves communicate with each other. Wolves usually live in packs but in summers hunts are conducted alone.

There are many ways to speak wolf in different languages.

How Long Does It Take To Learn Italian?

October 6, 2021
We use cookies on our website to give you the most relevant experience by remembering your preferences and repeat visits. By clicking “OK”, you consent to the use of ALL the cookies. However, you may visit "Cookie Settings" to provide a controlled consent.
Cookie SettingsOK
Manage consent