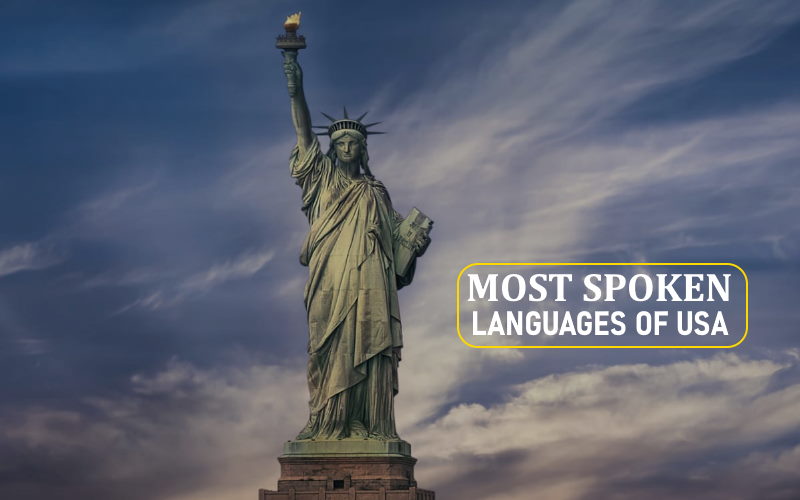 There is no doubt that the United States is undeniably defined by its diverse population, as exemplified by the sheer number of languages spoken within the country. Several hundred languages are spoken in homes across the U.S., according to a 2015 U.S. Census Bureau report.

What are the most common languages spoken by Americans? Where these languages are found on the map if we zoom in on specific sections? The following is a list of the top ten most spoken languages in the United States based on the number of people who speak each language at home.

Although English is the most spoken language in the United States, you may be surprised to learn that it is not the official language of the country.

Although the United States does not have an official language, the issue has sparked a heated debate for centuries.

It is usually liberals and anti-immigration who promote English as the official language, while conservatives oppose it.

English speakers constitute a large percentage of the population in the United States, regardless of whether it’s an official language.

Due to such a wide variety of regional dialects, it can seem as if there are many different versions of English spoken throughout the country.

There are a lot of variations within a single language (and that doesn’t include forms of English spoken elsewhere).

The stark differences in grammar, vocabulary, and pronunciation across the country make each region feel like its own world. English also exist in the list of spoken languages in India.

However, Spanish is one of the fastest growing languages in the country – its use increased by 233% between 1980 and 2013.

There are more Spanish speakers in the United States than in Spain, making it the second-largest Spanish-speaking country in the world after Mexico.

In addition to geographic enclaves and American lexicons, Spanish is also omnipresent in America. There are Hispanic communities in every state, but there are particularly large concentrations of Spanish speakers in major cities such as New York, Los Angeles and Miami.

The Southwest also has many speakers, sometimes referred to as “El Norte” because California, Arizona, New Mexico, and Texas were initially a region of Mexico and served as Mexico’s northernmost region until 1848).

Spanish words and phrases have made their way into American English, perhaps most notably in several American cities and states (San Francisco, Nevada, El Paso, etc.)

Many Chinese immigrants sought their fortune in California’s Gold Rush just like many native-born Americans. Their legacy can still be seen in the large and vibrant Chinese-American communities, sometimes called “Chinatowns” throughout the country.

In the New York metropolitan area, there are 12 Chinatowns, one of which is located in Chinatown. The oldest Chinatown in the United States is found in San Francisco, thanks to the Gold Rush.

The vast majority of Chinese speakers in the United States live in California, followed by New York, and Texas is a distant third.

It is widely spoken in the Philippines, and its standardized form is one of the country’s official languages. The majority of Filipinos in America live in California, but there are also substantial concentrations in Hawaii and the New York City metropolitan area.

After the Philippines were annexed by the United States in 1899, Filipinos were considered “American nationals,” making immigration easier.

Early in the 20th century, many Filipinos came to the United States to work as agricultural laborers in Hawaii and California.

The second large wave of Filipino immigrants arrived between 1960 and 2013 for a variety of reasons, including economic and educational opportunities, as well as a Philippine policy of encouraging migration.

Vietnamese speakers in the United States are only slightly fewer than Tagalog speakers. Between 2000 and 2014, more than 300,000 Vietnamese immigrants came to the United States to reunite with family members – many of whom sought asylum after the Vietnam War.

More Vietnamese settled in California than any other state (39%), with Texas holding second place (13%). There were actually so many Vietnamese immigrants living in Los Angeles, San Jose, or Houston between 2010 and 2014 that one in three of them lived there.

Even if you include Louisiana Creole French, which is a hybrid of French and African languages, French still ranks sixth in the United States.

With roots dating back to the 17th century, Creole French is a particularly interesting subset of American culture. Starting in 1699, France controlled the Louisiana territory, and French settlers brought their language and culture over.

As a result, this area was a rich mix of cultures and classes, with settlers from France and Spain, Native Americans, slaves, and freed slaves.

Due to the Louisiana Purchase in 1803, the importation of enslaved Africans skyrocketed, driving the influence of West African languages on the regional French dialects.

There are numerous terms and phrases in American English that have French influences. Every time you eat an omelet, decorate your home, or attend the ballet, you are seamlessly integrating French into your everyday life.

Korean immigrants have been coming to the United States since the early 1880s, but the greatest influx occurred after the Korean War ended and the Immigration and Nationality Act of 1965 abolished previous restrictions on Asian immigration.

Currently, there are over 1 million Korean speakers in the US with the majority living in California due to which it includes in the most spoken languages in the US.

In recent years, Korean culture has been growing thanks to the popularity of Korean food and K-pop, so the number of Korean speakers might also be increasing.

Next most spoken language is German in the US. During the colonization of the US, German was first introduced to the country.

After the World Wars, however, there was a decline in the number of German speakers since speaking German was considered unpatriotic.

In the United States, there are now 1 million German speakers, contrary to previous assumptions. Many high schools in the US are offering German as a foreign language option, so this language is likely to be here to stay.

The Arabic language has many variants and is spoken by Muslim individuals or by those from the Middle East. In the U.S., Arabic is the language spoken by more than 900,000 people.

Los Angeles, Chicago, and New York are the three highest concentrations of Arabic speakers. Arabic is one of the spoken languages in Africa.

Russian immigrants came to the US between the 1970s and the 1990s, bringing with them their culture and language.

It is also most spoken language in the US with around 825,000 speakers, placing it last in our list. Alaska, New York, California, and Pennsylvania are concentrated areas of speakers.

Russian isn’t as widely spoken as the other languages on this list, but due to its media presence, it is highly recognized.