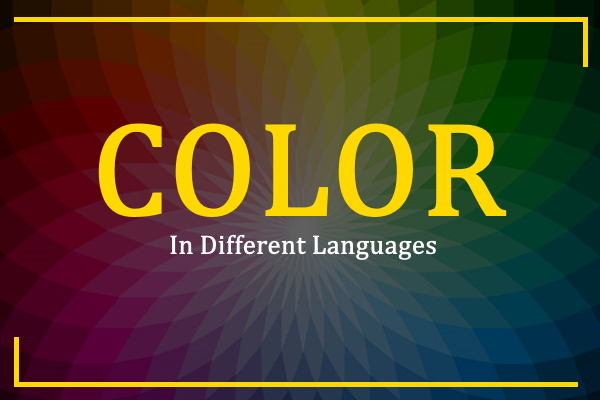 Color in Different Languages: Color is a light property seen by people. Color is detected by special receptor cells “cones”. Light a combination of all the colors of rainbow. Color is characteristic of seeing and differentiating between different light shades. Colors are formed on through variations in visible wavelength that passes through them.

Color in All Languages

Translation of word Color in almost 100+ different languages of the world.

Color in Other Foreign Languages

Video Translation of Color in 10 Other Languages

When a certain wavelength of light strikes through it, the color is formed. Color formation depends of the physical properties of an object such as surface, reflection, absorption etc.

The most common colors include red, blue, orange, white, green, yellow, orange etc. Primary colors are mixed with other colors to form a new shade.

Such as by mixing red and yellow we can get a shade of orange. Red yellow and blue are the three primary colors. All other color’s formation is done by mixing these.

Another factor to differentiate among colors is the presence of sufficient light. Color can not be easily distinguished in a dim light.

Light of a critical intensity is required. Also, quality of colors depends on the nature of material and how it interacts with light. However, by its color, saturation, and brightness.

The color can be precisely specified – these three characteristics are enough to distinguish between it and other perceived colors.

All the rainbow colors mixed with each other are in the sun’s rays. The blend is known as white light. It seems clear as white light hits a white pencil or a marker barrel it remains white because it doesn’t lose some color and retains the same hue.

A black pencil or marker absorbs all colors, so it looks black to us. Although musicians consider black as a color, scientists don’t believe black is the absence of color.

In some people their cones are not developed, and they cannot differentiate between colors or are completely color blind which means they see no color.

Colors have cultural significance also. White defines purity and blue reflects heaven. Today, purple is associated with evil in japan, but same is confined to color blue in Asia.

There is a general instinct about colors in different culture and religion according to the mindset of people. This does not happen to be true always.